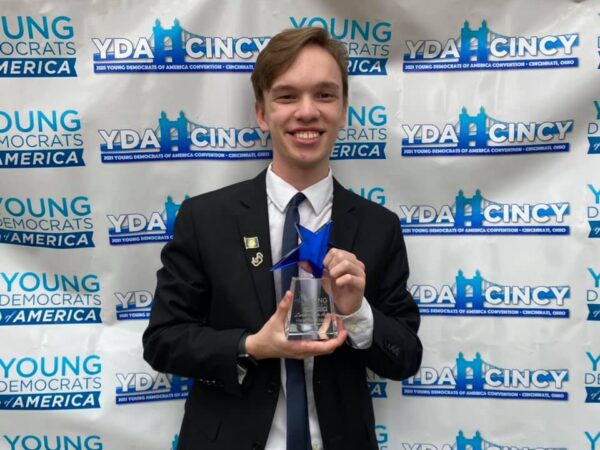 “I’m humbled to be granted this award and feel honored to accept it on behalf of the entirety of YDSD, which continues to work so hard to keep young progressive focused issues at the forefront of the conversation. Recognition from YDA validates our work and helps showcase to others in our community that YDSD is growing, strengthening, and ready to take on future elections to help create meaningful change in our state.” – Said Heather Krause, former YDSD President & Award Recipient.

“Heather is the reason that our organization is here in Cincinnati, representing South Dakota on the National Stage. She re-established the Young Democrats of South Dakota while the world was in the depths of a global pandemic. Throughout her term, she led the organization with a kind heart, even while marching through numerous stressful situations, both within YDSD and in her own personal life, that nobody could ever have planned for. She kept the heads of those around her held high when times were low. If the future leaders of South Dakota are anything like her, we’re in great hands. She is as deserving as can be of this award, and I was proud to accept it on her behalf. ” – Said Addison Miller, YDSD President.

The Young Democrats of South Dakota are the official youth arm of the Democratic Party, advocating on behalf of and providing a space for all Democrats age 13-35.